Calgary is a vibrant, modern city located in the southern part of Alberta. With a population of 1.4 million, Calgary is the fourth-largest city in Canada. Calgary has a multicultural character and is very diverse; close to 150 different languages are spoken in the city. Calgary is well-known for its citizens' friendliness and hospitality, as well as the natural beauty of its surroundings.

Calgary was recently rated the 5th most livable city in the world by the Economist Intelligence Unit.

Calgary is situated in the eastern foothills of Canada's Rocky Mountains, where the Elbow and Bow Rivers meet. The city's close proximity to the mountains makes it a perfect location for outdoor activities such as skiing, skating, hiking, fishing, and cycling.

Calgary also has a vibrant and eclectic arts scene, hosting many events and festivals throughout the year, in addition to fantastic restaurants, nightlife, shopping, sports and recreation facilities, and all the amenities you would expect of a modern and prosperous city. 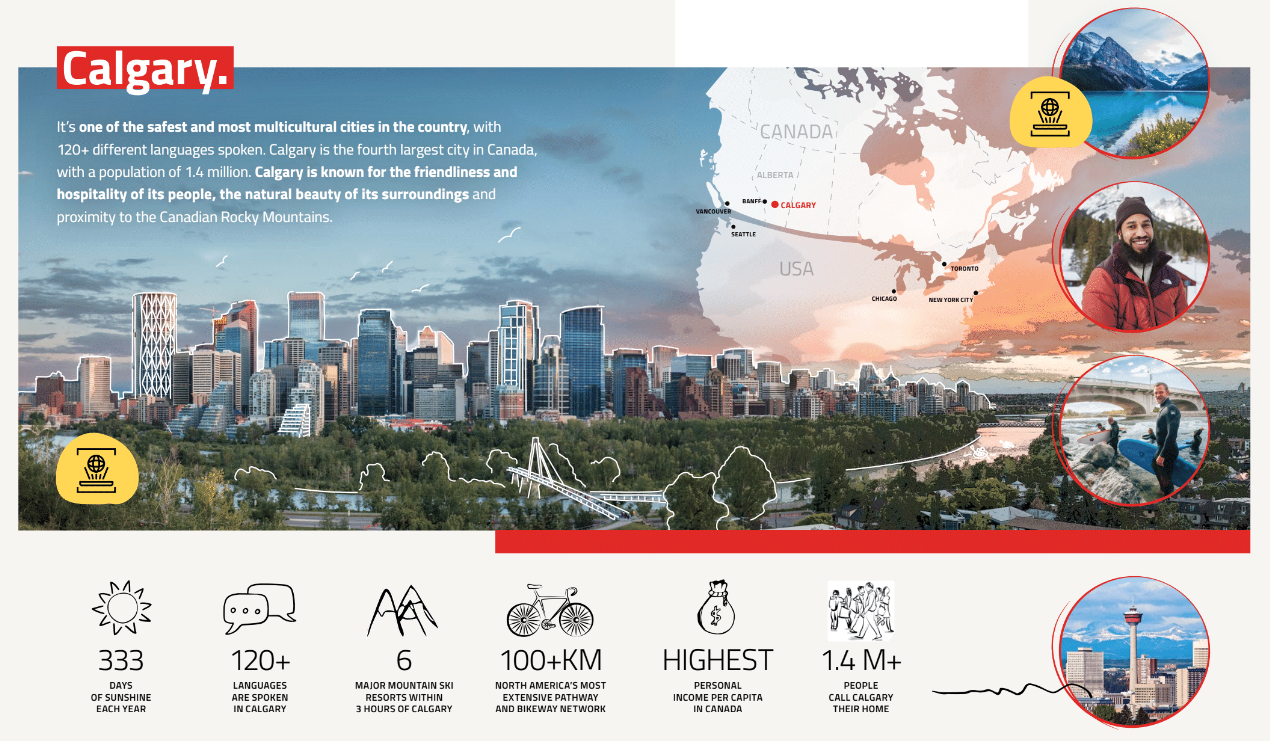 The earliest known human settlers in the prairies where Calgary is situated lived here 12,000 years ago. Before European traders arrived, the area was the home of four main First Nation tribes in the Blackfoot Confederacy: the Peigan, the Blood, the Blackfoot, and the Tsuut’ina. It is thought that the first European to see the area was Hudson's Bay Company trader David Thompson, who arrived in 1787.

Calgary is the sunniest major city in Canada, getting an average of 2,300 hours of sunshine per year. Whether hot or cold, you can almost always count on sunshine in the city. Calgary's weather is varied and constantly changing, cycling through all four seasons throughout the year. Temperatures in Calgary are generally mild, especially compared to most other cities in Canada. In the summer, temperature highs are typically in the low-to-mid twenties (degrees Celsius), occasionally surpassing 30 degrees C, but cooling off comfortably in the evenings. In the winter, temperatures can be very cold (lows reaching below -30 degrees C) or quite mild (highs above 10 degrees C), or anything in between. Typically very cold temperatures only last for a few weeks per year. One of Calgary's most distinct weather characteristics is the Chinook, a warm wind that blows in from the Pacific Ocean and can raise temperatures by 15 degrees (or even more!) in just a few hours, providing a pleasant relief from chilly winter weather.

Not only is Calgary the sunniest city in Canada and the fourth most livable city in the world, it’s also home to world-class venues, iconic sports franchises and an undeniable community spirit. You can feel this as soon as you arrive at the airport and are greeted by one of the 440 YYC White Hat Volunteers.

There’s an energy here that exhilarates, invigorates and motivates. Calgary is a thriving business centre with the most head offices per capita in Canada, but it is also surrounded by four UNESCO World Heritage Sites including one of the world’s great resort destinations in Banff National Park. There is always something to do, some new restaurant to try, festival to lose yourself in, or attraction to experience.

Calgary was recognized by SportsBusiness International in 2014, 2016, and 2018 as an Ultimate Sport City. With more than 300 thriving local sport organizations, and a reputation as a mecca for high performance Olympic winter sport training, Calgary has cemented its place among the leading sport cities in the world.

There are a billion reasons to hold your event in Calgary

Calgary is a meeting destination like no other: a mix of big-city energy and warm Western hospitality. With community spirit at its core, Calgary is full of shareable experiences. From a bustling downtown to character-filled neighborhoods, along winding rivers and inside every welcoming venue, there are a billion reasons that make Calgary the perfect place to host your next meeting or event. Why a billion? Because we’re investing more than a billion dollars into making your meeting experience in Calgary even more spectacular in the future.

Calgary is #TakingCare of Business

A citywide approach to health and safety along with spacious venues outfitted to meet today's hosting needs are just two of the billion reasons to meet in Calgary. Feel confident in the in-person meeting experience from arrival through departure, knowing that YYC Calgary International Airport and multiple hotels and venues have globally recognized gold-standard health accreditations.

Did you find it helpful? Yes No

Send feedback
Sorry we couldn't be helpful. Help us improve this article with your feedback.